It mainly affects maize, millet, sorghum, sugarcane, rice, finger millet and some types of grasses. Maize is the one most affected and leads to reduction on grain yields. The worm is usually cream white in color but sometimes has some grey and pink marks. However, the head is normally dark brown.

Different stages of the stalkborer 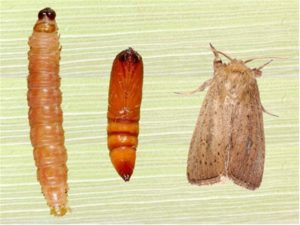 Damage: The maize stalk borers normally damages the young leaves first then the stems. The worms make some channels that weaken the stem till it breaks. The damage of the borers depends on the level of soil fertility; they damage more plants in poor soils than in fertile soils.

The larvae stage of the insect is the most destructive and has a biting and chewing mode of feeding. They feed on the terminal leaf whorls leading to production of a characteristic pattern of small holes.

As infestation progresses they invade the growing points causing dead hearts and the central leaves dry and wither. The older larvae tend to weaken the stem making it to break. Damage is severe when the growing points of young plants are damaged completely. The infested parts also tend to facilitate infection by other pathogens like fungi.

Detection: Small holes in straight lines on the youngest leaves. Regular checking and early control helps reduce the damage. The checking should start 2 to 4weeks after planting. 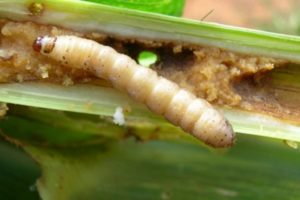 Use a small amount of neem powder and mix with dry clay soil or sawdust at a ratio of 1:1 and place in the funnel of the plant.

Mix wood ash and pepper powder at the rate of 2kg: 5 spoonful can be used and add a pinch of the mixture into the funnel.

The treatment should be repeated every 8 – 10 days during early growing phase before flowering.

Three treatments are required per crop.

The following insecticides can also be used: 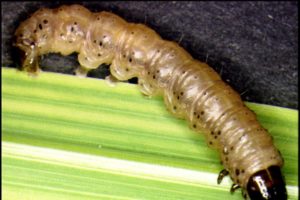 They should always be mixed with Integra 3ml/20l when spraying to improve efficiency.

It is important to consult the agricultural officer in the area for right instructions because different areas vary.

Eggs are normally laid in a single column on the stem under the leaf sheaths and hatch after 10days into larvae. There are normally 6 larval instar and they migrate to the whorls to begin feeding. One larvae is normally found per stem as they are cannibalistic. They mature in 35days after then they pupate in the stem. The pupae live for 2-3 weeks before turning to adults. The life cycle is estimated to take 7-8 weeks.

How to identify a stalk borer at different stages