The leaves, leaf sheaths and inflorescence are easily infested with aphids. This makes the leaves to become mottled and distorted, and the inflorescence become sterile.

New growing plants can then remain dwarfed. In the case of heavy attacks, the plants tend to wilt and die. Aphids are also known to be vectors of viral diseases affecting cereals and other crops

The female aphids normally reproduce without mating, they don’t lay eggs but instead birth live young ones. 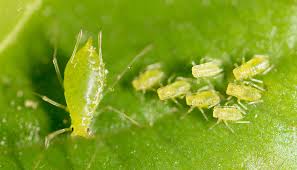 Elongated aphids: The antennae is short, the color varies from yellow green to dark olive green or blue-green. Some of the insects are normally dusted with wax having dark purple areas around the base of the siphunculi. The siphunculi are dark and short with the insect being 0.9-2.4mm.

Aphids’ larvae: They have a yellow green to dark green abdomen without the dark dorsal markings near the siphunculi. They are 0.9-2.4mm..

The aphid adults are winged or unwinged, elongate and measure between 1/25 to 1/12 inch in length. They are yellow green to dark olive green or bluish green having a light powdery covering. During cool weather their color tends to be pale green while during warm weather tend to be darker.